In the series of works called “Men of lead”, Galeria Rusz performs a vivisection of the myths, beliefs and ideas that shape the collective consciousness of the Polish nation. Contrary, to the claims of Andrzej Wajda*, the artists from Galeria Rusz are convinced that Poles are men of lead not of marble or steel. We are lead soldiers, who treat reality as a game of heroism, rather than real people of flesh and blood, who have personality. Our minds are warped by a mental lead poisoning, which stems from an excess of bullets (from our numerous battles) that are stuck in our collective body of nation. Our legs are leaden, because we are afraid of people and of reality, our heads are heavy like lead after the latest roisterous night. Lead is, unfortunately, the kind of metal that is soft, heavy and toxic… Are these also our national characteristics?

The artists from Galeria Rusz are convinced that a great opportunity for change lies in the fact that, as a society, we enter adulthood – it’s been 20 years since Poland regained independence. Therefore, it is high time we thought about what we want to become, instead of passively assuming the mentality handed down to us from our far-from-perfect ancestors. Galeria Rusz is not alone in its ironic derision of the Polish collective character. It is already in the year 1613 that the Scottish poet John Barclay wrote about Poles: “This nation was born for violence and wilfulness which they call freedom”. In 1885 Georg Brandes, a Danish writer and critic characterised the Poles in the following way: “A nation that is quarrelsome and impractical, vivacious and care-free, disdainful of persistence and hard work”. One of our greatest poet, Cyprian Kamil Norwid wrote on 1862: ”As a society, we are hopeless. Indeed, we are not a society, we are one great national symbol (…). As Poles we are giants, as humans we are dwarfs”. And Edmund Lewandowski, a sociologist the author of the book called “The character of the Poles and of other nations”, passes the following judgement: “Different opinions, expressed by both the outsiders and the Polish people themselves, hold the Poles as an infantile nation of Don Quixotes, divorced from the prose of life, constantly daydreaming, following their emotions and delusional hopes rather than reason and cool calculation.”

*Andrzej Wajda – a Polish theatre and film director, a prominent representative of the Polish cinematography and one of the creators of the “Polish Film School”. He is the author of important films, taking up the issues of the Polish contemporary history. Among these are “Man of marble” (1976) and “Man of steel” (1981). 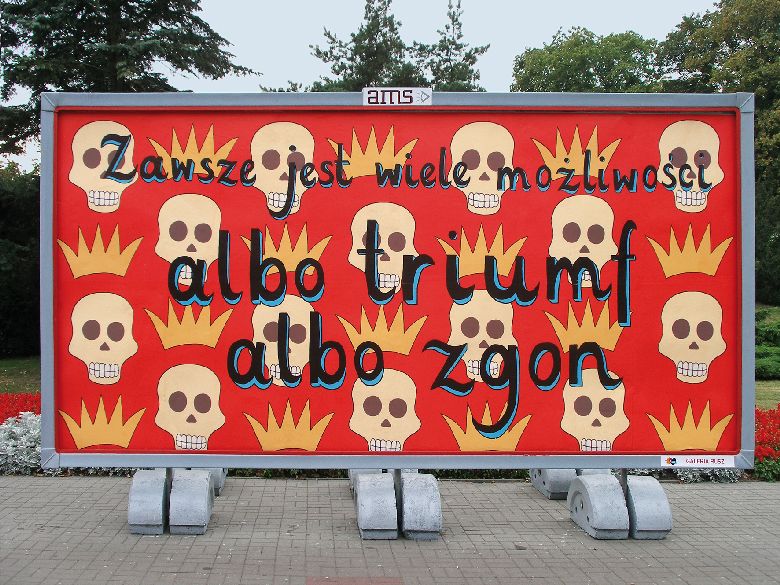 Men of lead: Options, 2009, billboard, Toruń, (JG) / There are always many options – either triumph or demise 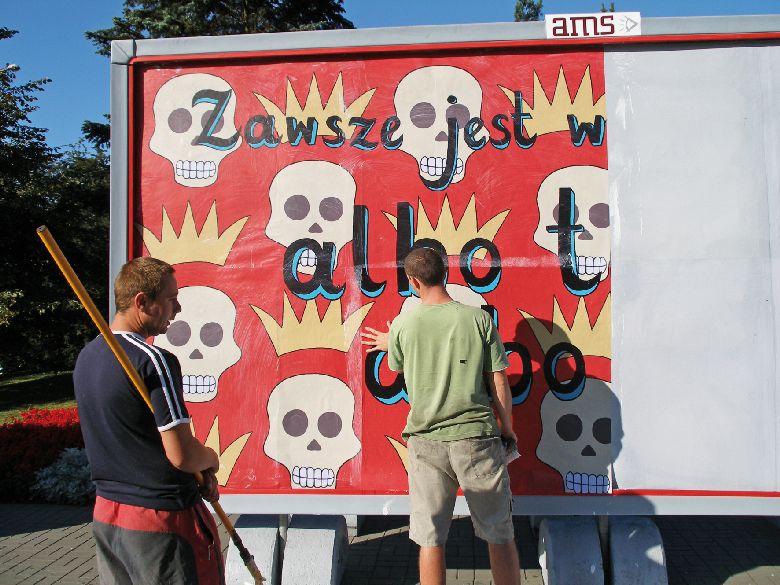 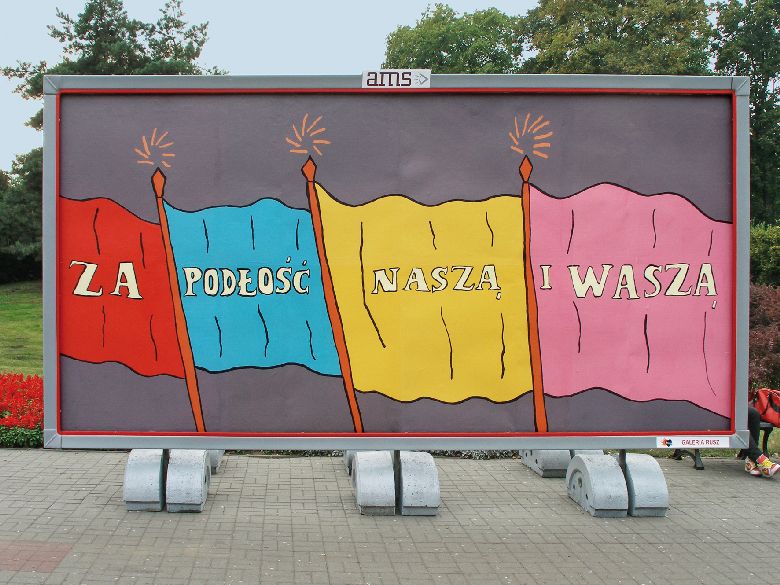 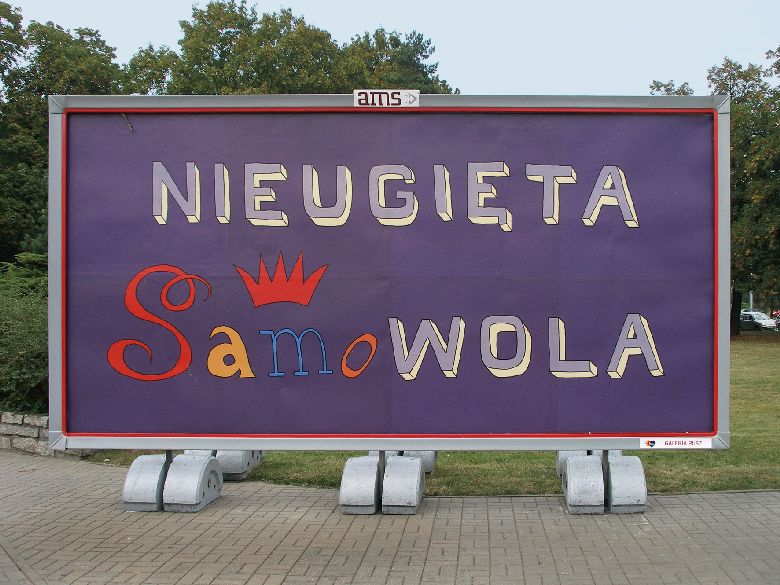 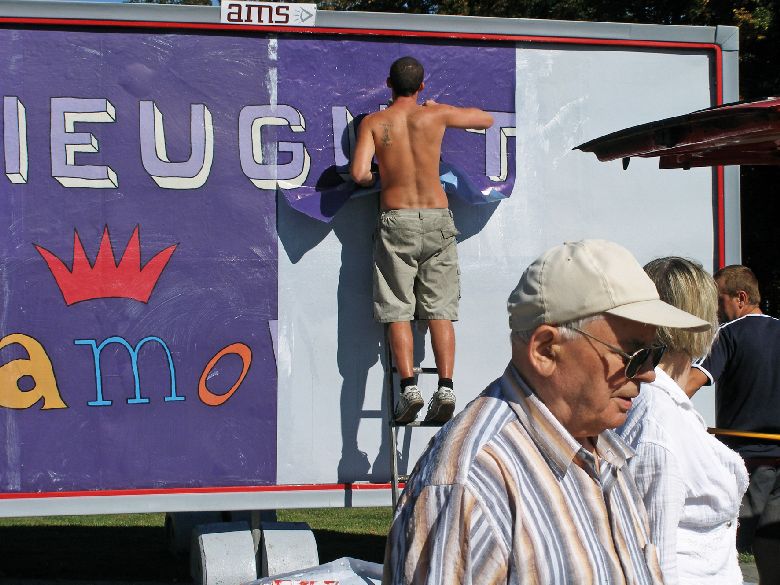 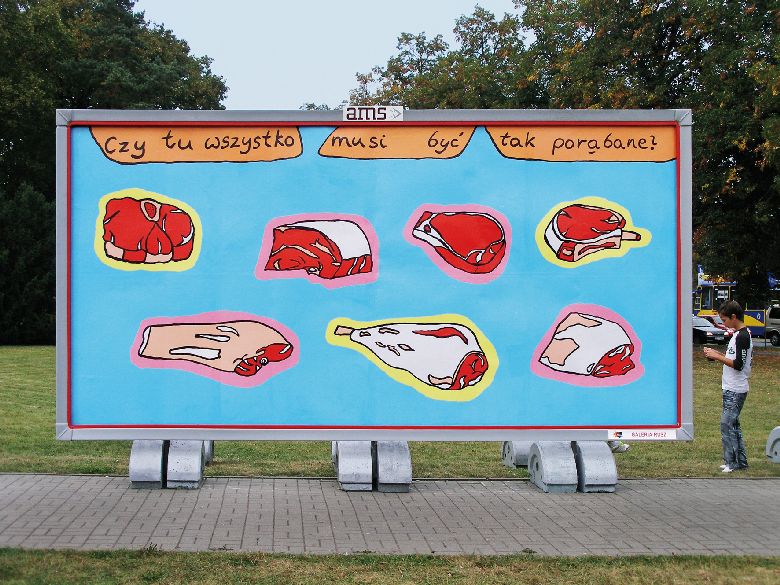 Men of lead: Butchered, 2009, billboard, Toruń, (RG) / Does everything have to be butchered in here? 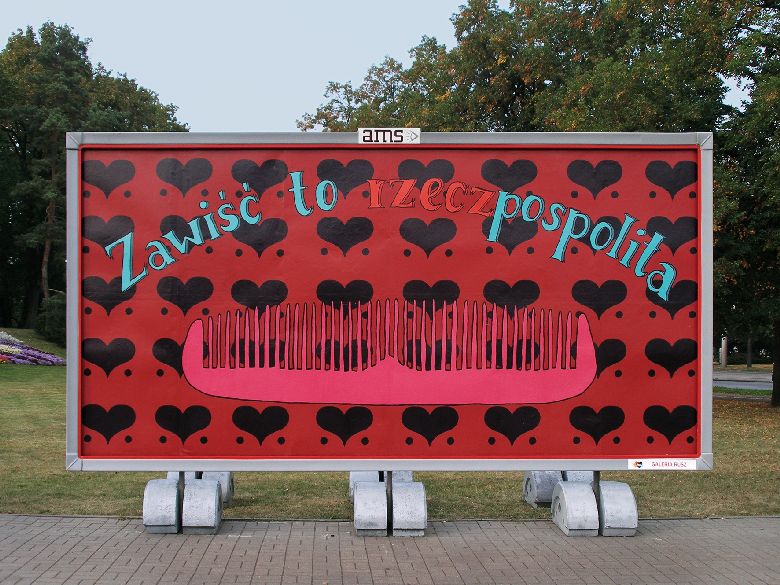 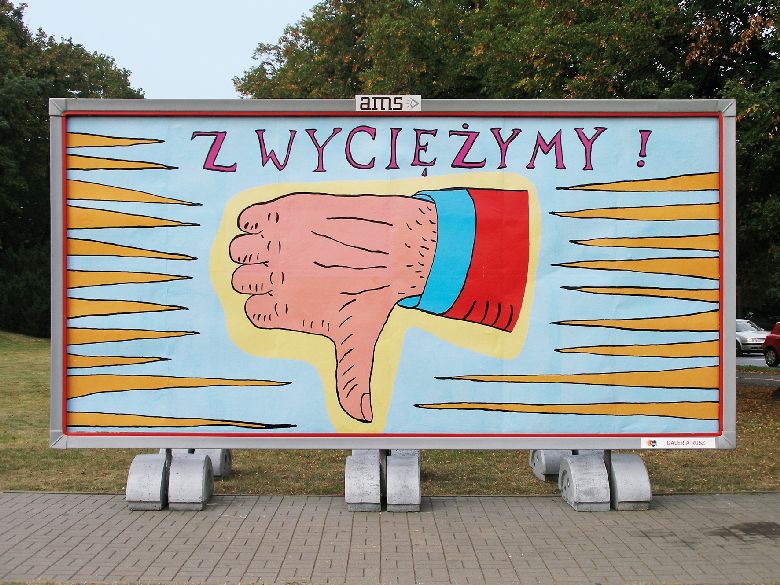 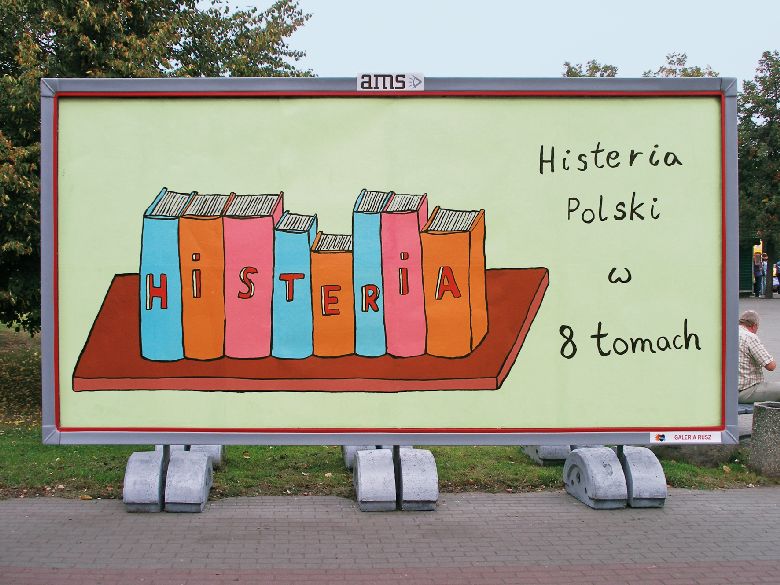 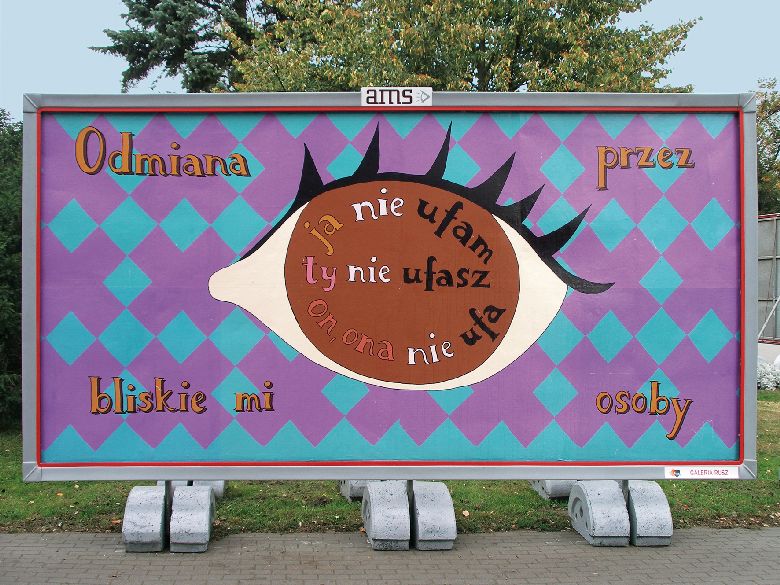 Men of lead: Trust, 2009, billboard, Toruń, (JG) / Verb inflection for my closest persons: I don’t trust; you don’t trust; he, she doesn’t trust 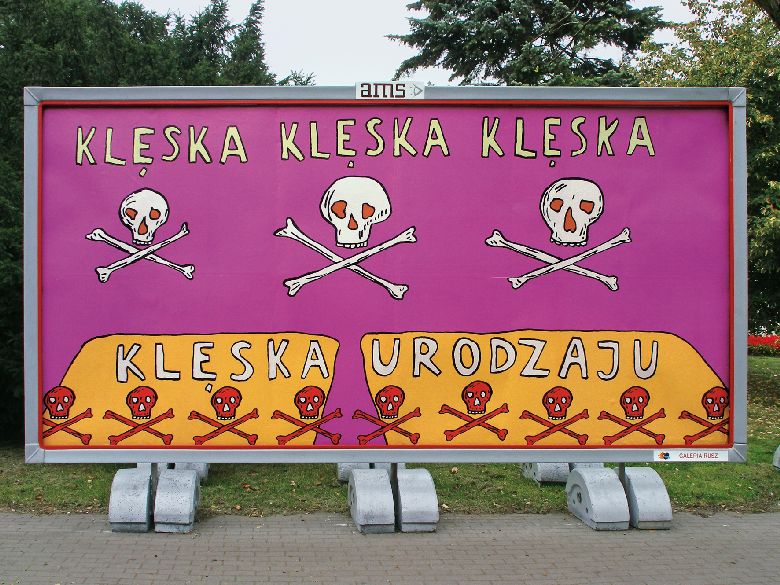 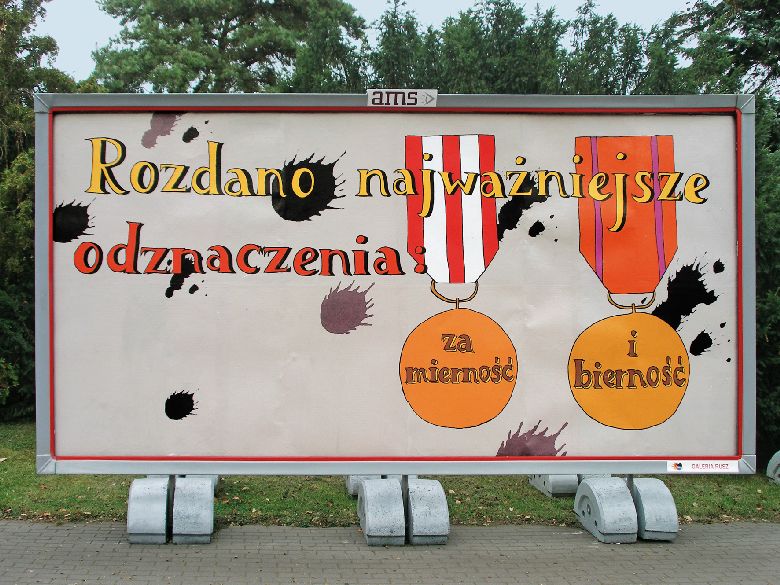 Men of lead: Mediocrity and passivity, 2009, billboard, Toruń, (JG) / The orders of the highest rank have just been awarded: the Order of Mediocrity, the Order of Passivity 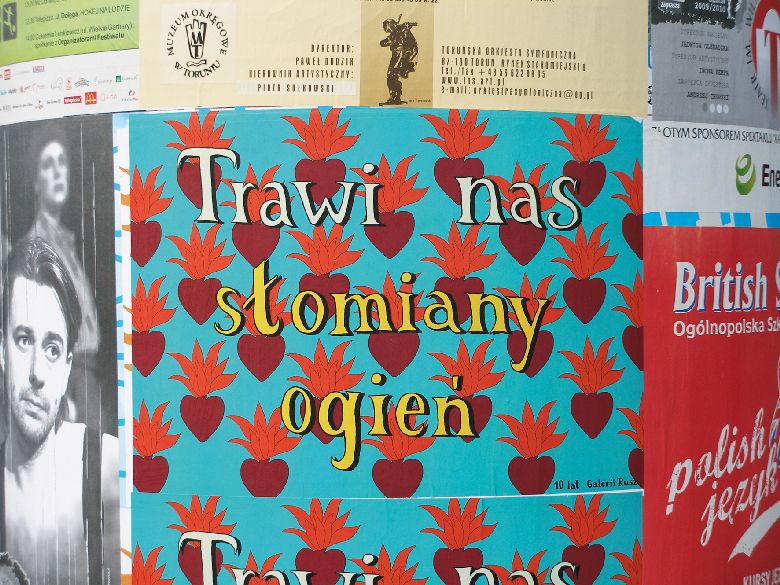 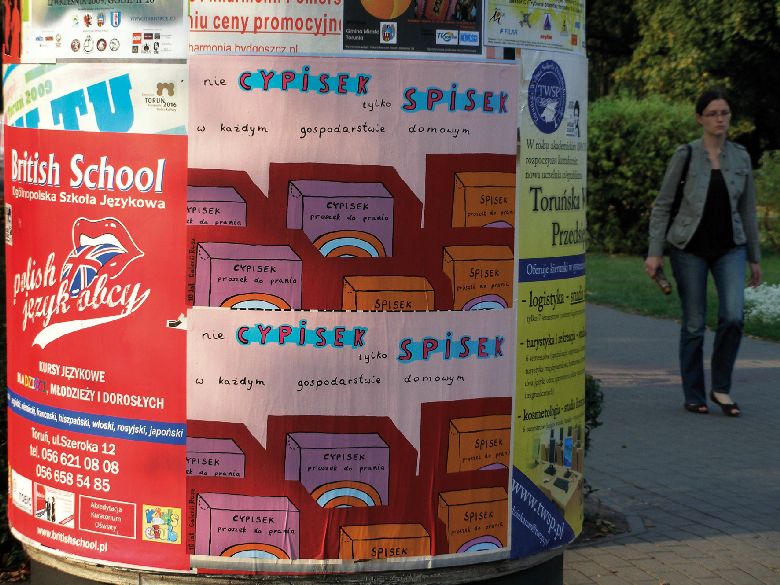 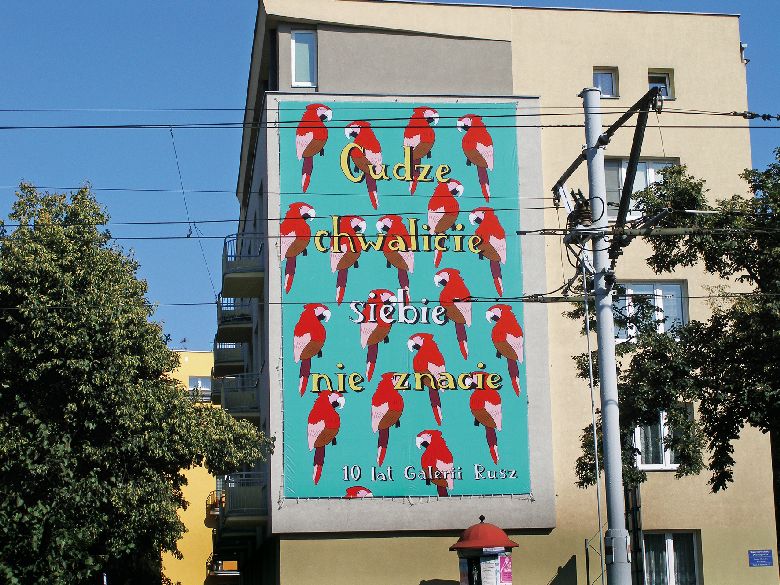 Look within, 2009, bilbord, exhibition for the 10th anniversary of Galeria Rusz, Toruń / Don’t look on the grass at the other side – look within 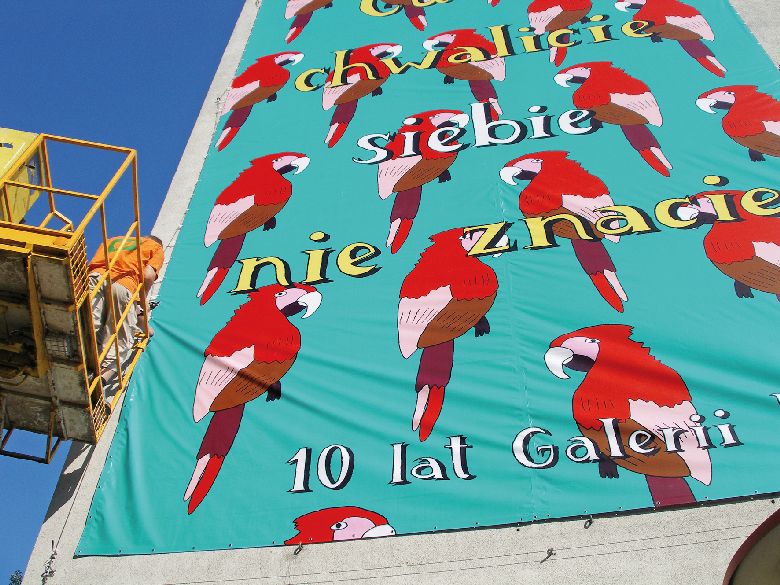