Galeria Rusz: We’ll start with a very basic question: why are you involved in art?
Ken Lum: I think now that I always wanted to be an artist, ever since I was a child.  I just had no conception that it was ever possible for me.  I was not exposed to art nor know there was such a thing as the art world.  Throughout my youth, I worked in various jobs that involved illustrating and painting (such as sign paintings).  Although what I was doing was not meant as art, I think it was an approximation of my desire to make art.  No, I certainly did not become an artist lured by money.  I like the idea of art and the idea of being an artist precisely because it should not be about money but something far greater.  Being an artist also means having some measure of escape from factory life.  It is living out critical theory.  Being an artist is also a lot of fun, although it can also often be painful, even heartbreaking.  I have been able to see and experience so much of the world because the life of the artist means being open to the world and taking action, in the form of artmaking, as a response to the world.

GR: Is it of any significance for you and your art that you are a Canadian of Chinese descent?
KL: Of course. There is significance in terms of the formation of my identity, just as every person’s formation is inscribed in his/her art.  I know me through the prism of others and how others see me. Including how others see me with East Asian eyes and skin colour has had bearing on my own sense of self.  This is true for everybody of course except that how people sees you and how you are defined by others  is also measured with issues of dominance in terms of economic class, racial considerations, gender and sexual orientation.  Many years ago, my Chineseness was much more of an issue than it is now.  I would have a curator from Europe visit me, for instance, and they were surprised that I was Chinese and as a result they would suddenly read my works in ways that demanded that the works be more ‘Chinese’ or less “Chinese”.  Today, in a much more globalized art situation, it is less of an issue.  But then, it was a problem for me as I always had to defend my work in the context of my skin colour.

GR: A substantial part of your works concerns daily, mundane life, work and everyday activities. Why do you attach such importance to it?
KL: For a very long time, the category of the everyday was deemed of less importance than big and so-called transcendental subjects.  But for some time now, there has been a revision in terms of our understanding of what constitutes important subject matter for art.  In the 1970s, Screen magazine revised the status of the great Studio B director Douglas Sirk, asserting that Sirk’s body of work deconstructed in highly innovative ways the very genre of film which he pursued, namely women’s films that were deemed of secondary importance to big blockbuster productions.  Similarly, one can say Pop Art challenged high art by its insistence on then lower categories of subject matter.  The everyday may be mundane but it is often mundane for a reason–people feel entrapped by their existence, by the rules of everyday life that are imposed upon them.  Therefore, it is fitting that high art deals with this question of the mundane.  Not by reproducing mundane art but by offering insight into the mundane conditions of everyday life.

GR: Why do you present the majority of your works in public space?
KL: The majority of my work is not for public or outdoor spaces but gallery type spaces. That said, most of my work expresses a desire to link up with spaces beyond the familiar art frames or contexts.  As such they seem readily transposable to more public or non art contexts. I am immensely interested in the limit that divides art from non art because  of the question of the Real (in the Lacanian sense) because that limit also circumscribes so-called art- from non-art audiences. The circumscription prevents greater participation not only of audience but also different subject matter or at least different treatments of same subject matter.

GR: Do you think that your art can change reality for the better?
KL: I don’t think art can have a changing effect like a medical doctor can on an ailing soul but I think as an artist one has to believe in a reason for the positive for doing what an artist does. Afterall, despite many advantages, the artist’s life is in many ways an involuntary one and it can often be a harsh and heartbreaking path. I would like to believe that one makes art because one is empathetic to the world and in being so can express many aspects of life that are true yet seldom or never expressed. In that sense, art is invaluable.

GR: This year, you were a juror of art on billboards competition. Could you give some advice, some hints, to artists who will in the future take part in our competition? What should they focus on while creating billboards?
KL: First of all I am grateful for the honour of serving as a juror. Torun is a remarkably beautiful town and I appreciated how the billboards integrated so well into the social setting. There were a lot of strong ideas in the competition. The best of them went further than to serve as a perhaps more critical version of advertisement form. The best were more layered, made one think about the world at large and were visually strong in design. In other words, deepen the idea without complicating it. Think about the spatial ratio and expanse of the billboard and don’t just crop something to the given scale. Play with the surface. Think a bit more radically. Imagine the experience of the passersby. Lastly, come to Torun to attend the festival. It is a lovely experience. 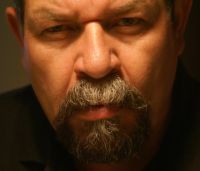 Galeria Rusz: What made you interested in art? After all, you studied law and could have become an affluent lawyer?
Marcos Ramirez ERRE: I remember being interested in art from an early age; I had drawings instead of notes in my textbooks. I also liked Law, as an option for a career, but in my country the legal system is corrupted, so I decided not to be part of that, and instead follow my inclination for Art.

GR: What ideas lay behind your art?
MR: The Ideas that are important also for a good Lawyer – the pursuit of Justice, equality, freedom, peace, and all the concepts that can make us live in a better world. My art is very much related to the social and the political arena of our time.

GR: Do you think that your art can change reality for the better?
MR: I am sure of that. It did change me just by preventing me from betraying my principles, so I believe it can change some of the many people who have the chance to experience my work.

GR: How do you, as an artist, benefit from living on the border?
MR: Well, the main benefit is that I live in two different worlds at the same time, getting the best of both and trying to evade the harm that the worst of both worlds can cause me and other people. Still I consider living on the border, and especially one as important as the Mexico/ USA border, a huge advantage.

GR: Why do you present the majority of your works in public space?
MR: I try to stay in contact as much as possible with the public that is not a specialized one, a public that not necessarily goes to Museums or Art galleries, because I like my world to communicate with the regular people, the everyday, passing by citizen that can still be amazed by finding art suddenly in the public space. I like at other times, to aim at the gallery or museum attendants, but still I treat that public in the same way. The language I use stays the same, I try not to change it.

GR: This year, you were a juror of art on billboards competition. Could you give some advice, some hints, to artists who will in the future take part in our competition? What should they focus on while creating billboards?
MR: I think there are several conditions to consider while creating a billboard piece of Art. The first one is that it has to work like a regular street billboard does, so it has to communicate in a fast way, since for most of the road billboards you only have a few seconds to read the message or get the Idea. The second one is that it has to be able to “sell“ the idea or the concept almost at the same speed, since the spectator needs to decipher the billboard. For that purpose you need first – a good idea, followed by simplicity, clarity, cleanness, and a good use of color and composition, which are invaluable.