This edition of the festival was unique as it was entirely devoted to the global epidemic. It was a kind of a hot report from the battlefield, a fresh message and personal reflections “displayed on billboards” by artists from all over the world. It was a palette of different perspectives on how we cope or do not cope with this new challenge facing humanity today. This festival was not only about the threats and challenges we face, but also about the hopes and solutions we are seeking and dreaming about.

The artworks were exhibited in the city space of Toruń on billboards, citylights and LED displays. The model of presenting art in the city space works especially well in times of the crisis related to the epidemic as it allows recipients to safely participate in culture, without risking their health. For one month the city space was turn into a unique art gallery with valuable works, free of charge and available 24h/7. In this way, the works made a noise in the world and reached a wide audience, even those recipients who do not visit traditional art galleries and museums.

„Art Moves Festival of Billboard Art is unlike any other art festival that I know of in the world. Many museums have been closed due to COVID, because it is not safe for people to assemble indoors. Museums are now starting to pivot towards displaying artworks on billboards and in outdoor exhibitions—a practice that Art Moves has innovated and developed over a long track record spanning 13 years. Art Moves’ outdoor exhibitions in public parks, artworks in ad spaces, and via mobile billboards are refreshing ways to deliver art to the public, with minimal public health risks” – wrote artist from New York Christina Wong Yap about the event in Toruń. She has participated in the festival a few times, and in 2012 she took part in the opening ceremony in Toruń.

Over the past few years, billboard art has become a cultural “must have”. Billboard exhibitions are being held from Teheran and Mexico City to Paris, Los Angeles and New York. Toruń is one of the pioneers of this trend – Art Moves is the first, and so far the only, cyclical festival promoting this kind of art in the world. “Billboards are unequivocally associated with advertisingall over the world, but not in Toruń – for a few autumn weeks the billboards become anti-billboards, as a manifestation of thought contesting consumerism as well as any forms of intellectual and spiritual submissiveness. England has its conscience-pricking Banksy, and we – thethought-provoking Art Moves festival” – Piotr Sarzyński wrote about the festival in “Polityka” magazine. A similar initiative appeared this year in the USA – the works are presented on billboards in Times Square in New York to express gratitude to healthcare workers. This project has gained great popularity and is presented in more than 400 city spaces in New York, Boston and Chicago.

This year works relate to the leitmotiv of the entire event: “Epidemics – a global catastrophe, a punishment, or a chance to reinvent yourself and the world?”, and will be presented on billboards, citylights and LED displays. This competition slogan can be treated as a metaphor of all the processes taking place in the world today. The past few months have changed the entire world – societies and countries, families and individual people. The standard rules of reality have been suspended, and we have been hiding in our homes, isolated from others and transfixed with horror. Individuals and whole societies have been overwhelmed by fear, anxiety and trauma. These tough moments and experiences have left an imprint on us, but have they changed us for the better? Is it a permanent or just a temporary change, and will the world be what it used to be? Should we quickly forget about what happened – our experiences and emotions; or maybe on the contrary, should we remember it well, think about it and draw constructive conclusions? Is it a punishment or maybe a chance to reinvent ourselves and the world in a joint global effort? How to use these difficult experiences to build a better world? What can these tough events we have all experienced in different places around the world teach us? Which of these experiences can strengthen us and the culture we live in to better cope with similar challenges in the future?

As always, the festival consists of a competition phase and then a presentation of the artists invited by the organisers. The best works were presented on billboards. 789 artists from 70 countries entered the contest “Epidemics – a global catastrophe, a punishment, or a chance to reinvent yourself and the world?”. We received 1410 artworks from Russia, India, Uzbekistan, China, Macedonia, Cuba, Italy, Iran and many others!

Not only do artists come to grips with the festival slogan. Our spectators were also able to join in the creation – as part of Art Moves Workshop, where workshops for children was conducted. There are also special interactive billboards that allow recipients to take an active part in the festival. 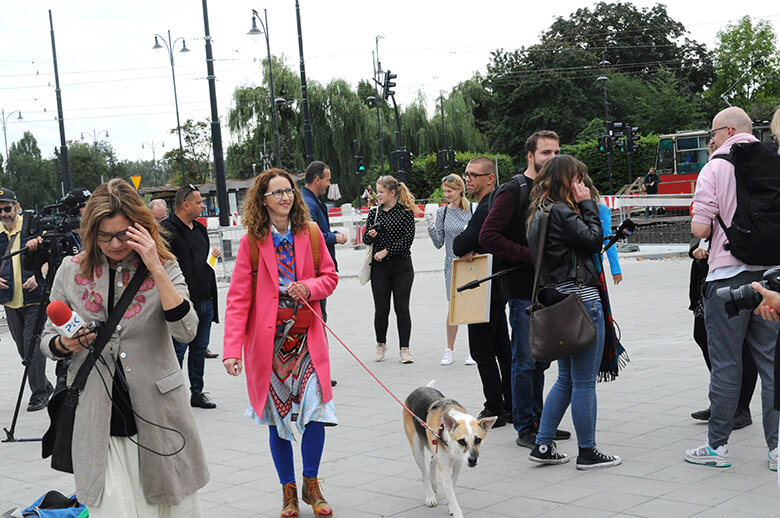 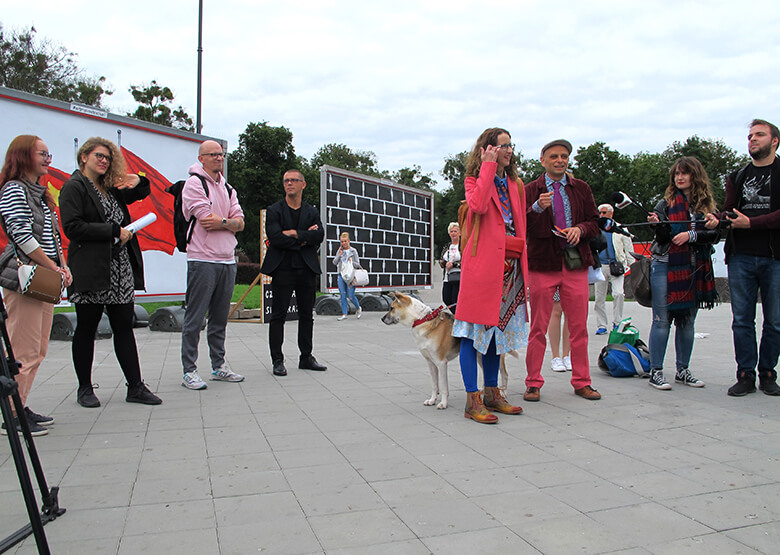 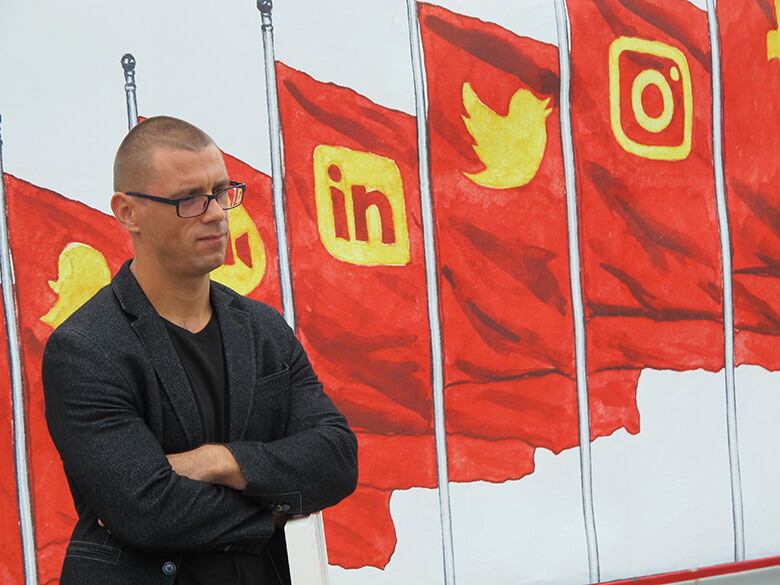 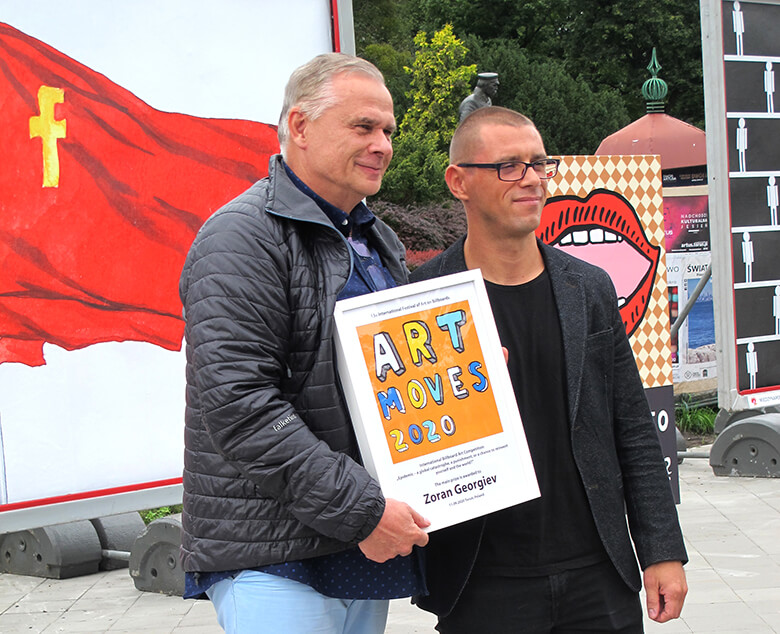 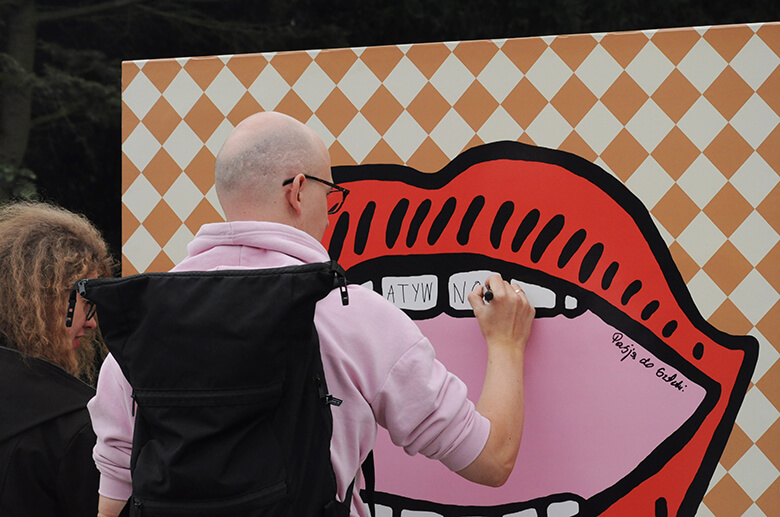 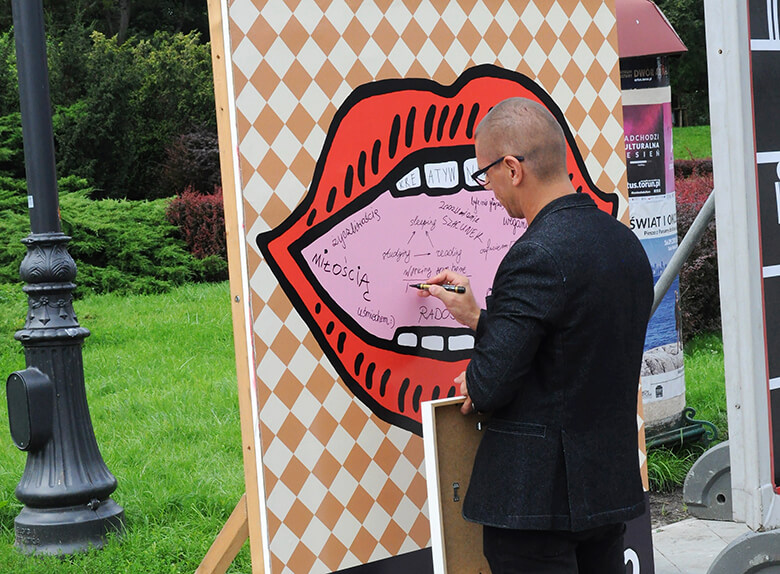 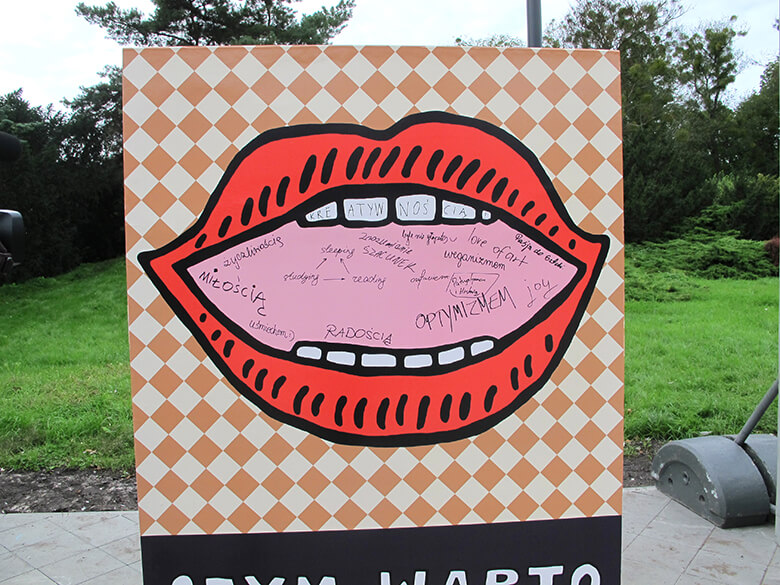 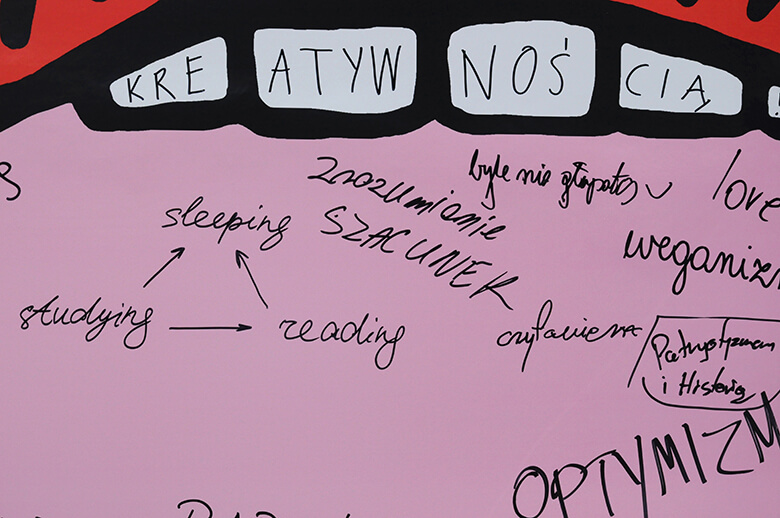 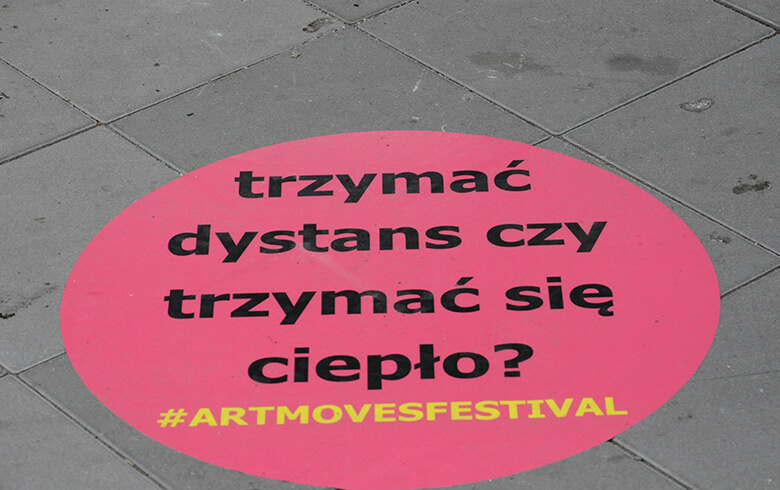 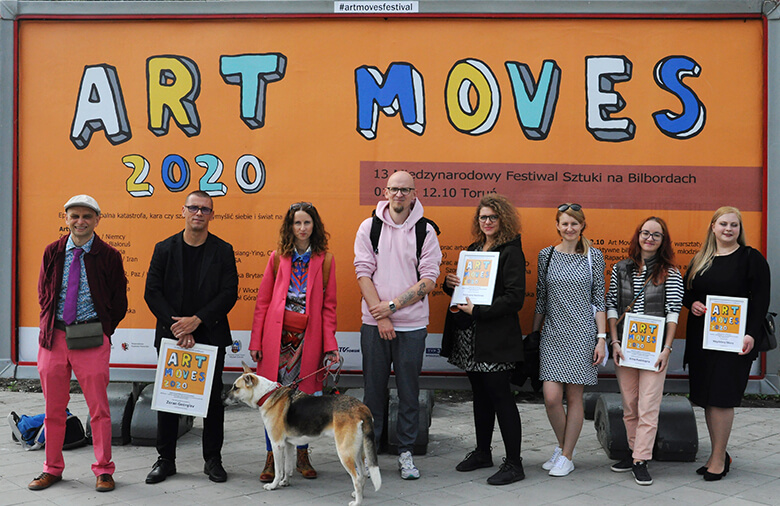 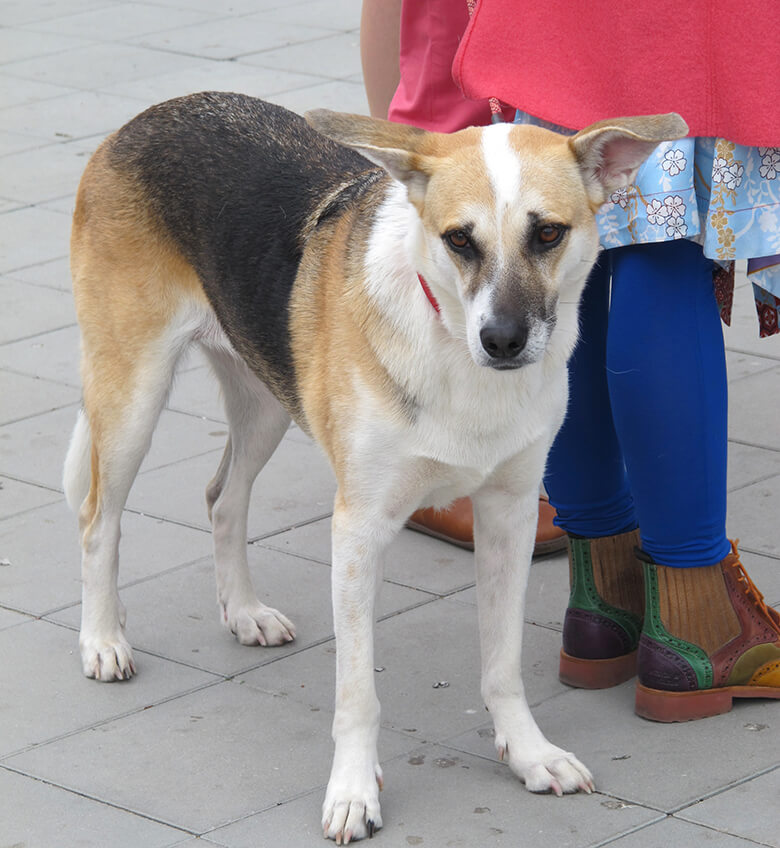 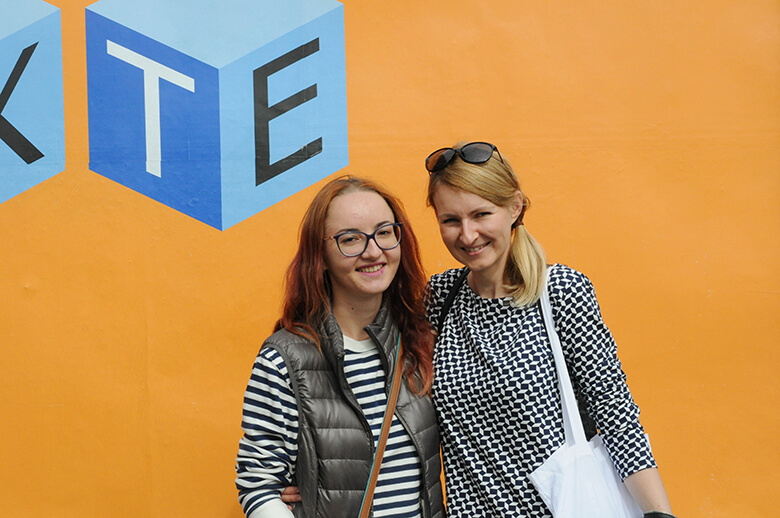 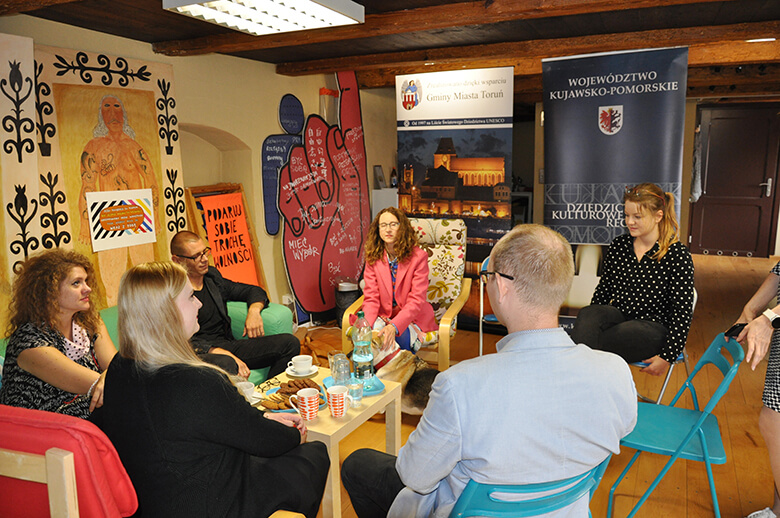