Over the past few years, billboard art has become a cultural “must have”. Billboard exhibitions are being held from Teheran and Mexico City to Paris, Los Angeles and New York. Toruń is one of the pioneers of this trend – Art Moves is the first, and so far the only, cyclical festival promoting this kind of art in the world. “Billboards are unequivocally associated with advertisingall over the world, but not in Toruń – for a few autumn weeks the billboards become anti-billboards, as a manifestation of thought contesting consumerism as well as any forms of intellectual and spiritual submissiveness. England has its conscience-pricking Banksy, and we – thethought-provoking Art Moves festival” – Piotr Sarzyński wrote about the festival in “Polityka” magazine. – Now we work with those ubiquitous, open or hidden advertisements and propaganda – Rafał Góralski from Rusz Gallery, co-creator of the festival, says. Billboard art is like an antidote, a respite and time for reflection in this crazy hurried world. Billboards have a wide coverage, reaching everyone, being pro-democratic and egalitarian, going beyond the life andinformation niches people operate in. They change the city into a large art gallery where art can be usedfree of charge, 24 hours a day / 7 days a week, with no limits or barriers.
– The festival has 3 levels of influence – Joanna Górska from Rusz Gallery, co-creator of the festival, says – we make up a theme and direct it to artists from all over the world, who respond to our question and create their own works. The best of the works are presented in the city space of Toruń. And people, inspired by these works, can find their own ideas for a festival theme. So, we combine what is global with what is local.

This year works relate to the leitmotiv of the entire event: “An impending disaster or a chance to save yourself and the world?”, and are presented on billboards, citylights and LED displays. This competition slogan can be treated as a metaphor of all the processes taking place in the world today. Will the world end soon? Will most species of plants and animals on our planet become extinct soon? Will there be an ecological disaster? Will most people live in extreme poverty, and will the world be constantly at wars? We are drowning in this kind of information that causes fear and paralyses. How to not slip into a depression and defeatism, how to treat the alarming data as a challenge and seek creative solutions? How to hear a wake-up call? How to find hope and energy for action? How to reject old destructive thinking and acting patterns and find new better solutions? How to not slip into pessimism and apathy and believe that a lot depends on us – our lives, other people’s lives, and lives of creatures that surround us? How to go beyond our personal perspective, beyond our own SELF, and notice that each one of us is a part of some larger wholeness – humanity and nature, and has an influence on this wholeness? How to think long term, not only about short-term benefits that turn out harmful in the long run? What good can we do for ourselves, the world, and those who will come after us?
As always, the festival consisted of a competition phase and then a presentation of the artists invited by the organisers. The best works were presented on billboards. 539 artists from 68 countries entered the contest “An impending disaster or a chance to save yourself and the world?”. We received almost 1000 artworks from China, Armenia, Lebanon, India, Ecuador, France, Tunisia, Iran, USA and many others!

The jury panel composed of artists and curators, including:
Adam Niklewicz / artist / North Haven, Connecticut, USA, Mark Titchner / artist / London, Great Britain, Małgorzata Augustyniak / art historian, vice-president AMS SA / Warsaw, Poland, Rafał Góralski / artist, curator, Art Moves Festival director/ Toruń, Poland selected 10 most interesting projects which are exhibited on billboards during the Art Moves Festival 2019. The jury decided to confer the main award of 5000 PLN to Dawid Celek from Poland.
Not only do artists come to grips with the festival slogan. Our spectators were also able to join in the creation – as part of Art Moves Workshop, where workshops for children was conducted. There are also special interactive billboards that allow recipients to take an active part in the festival. 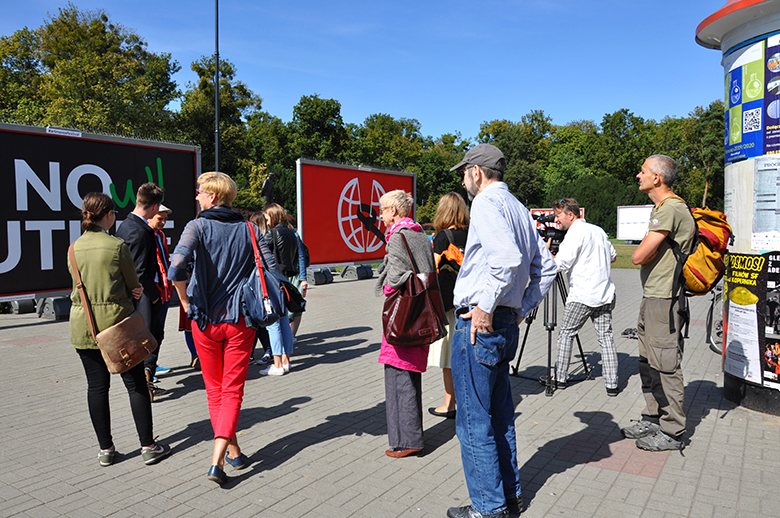 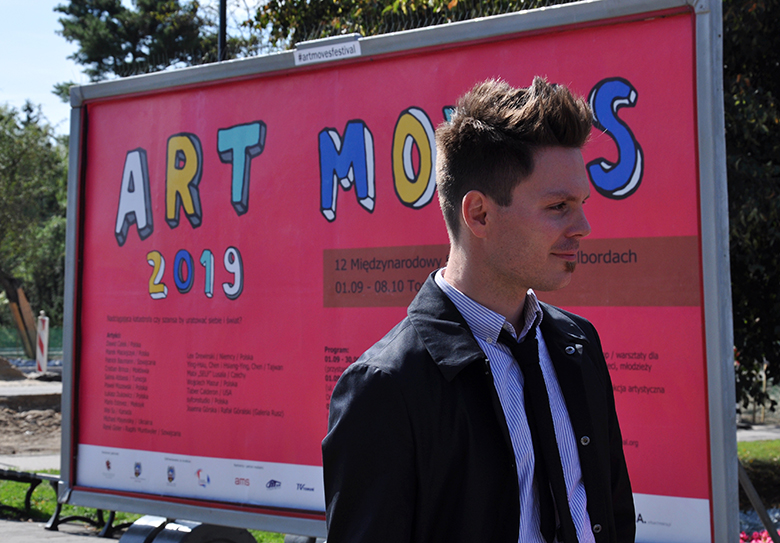 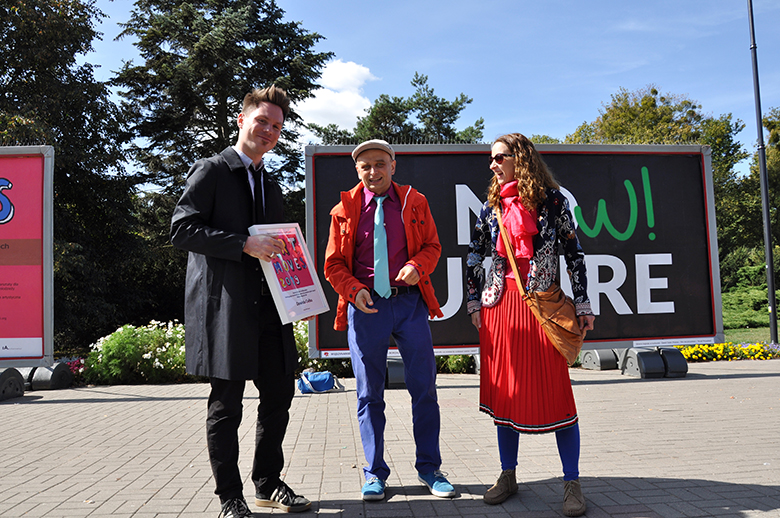 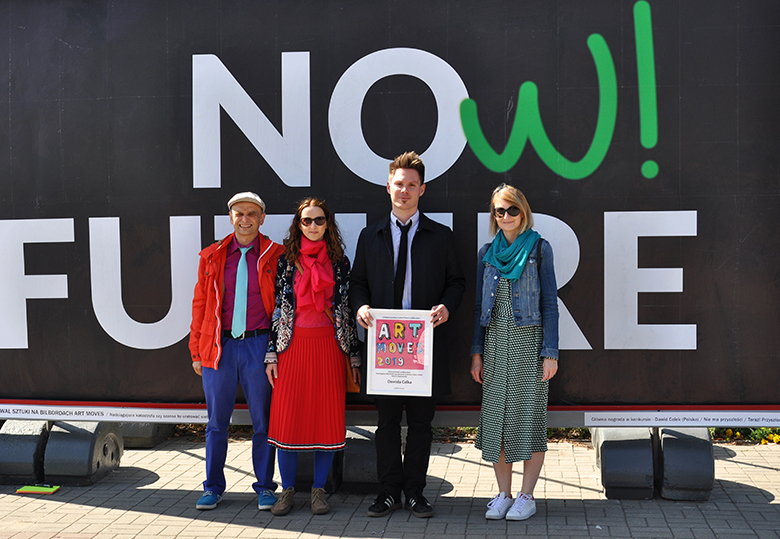 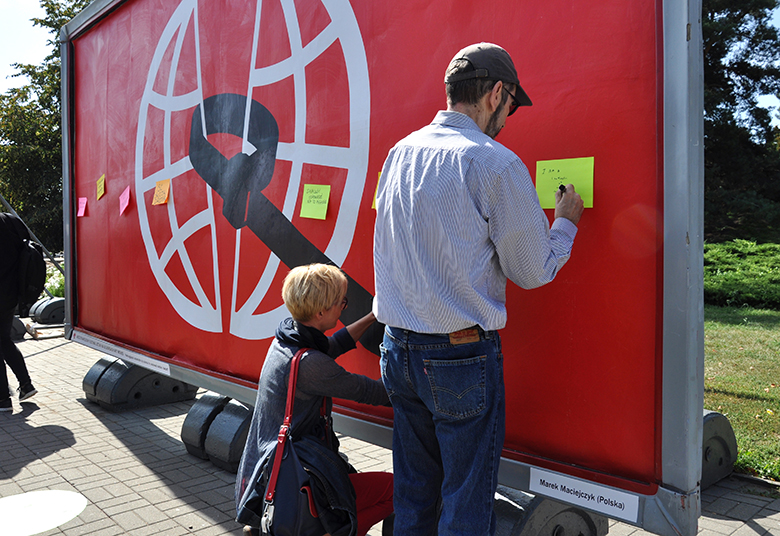 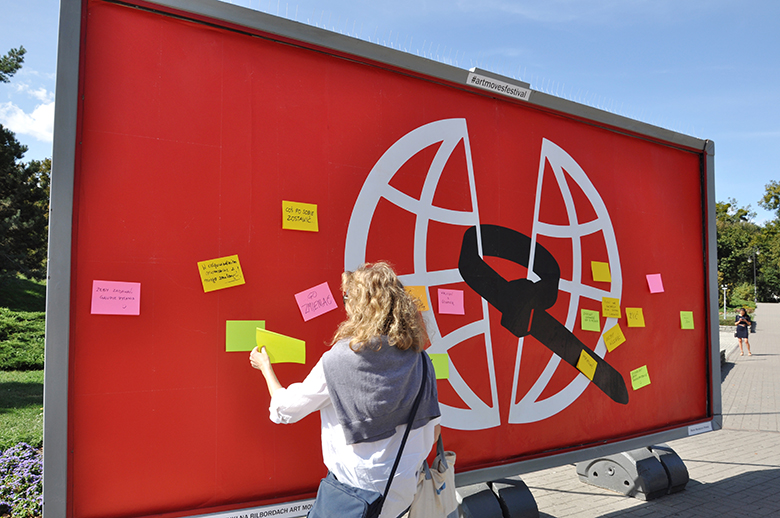 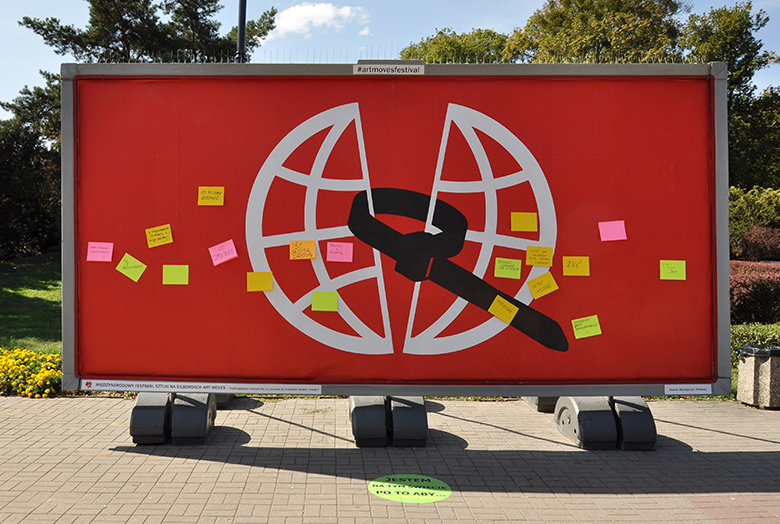 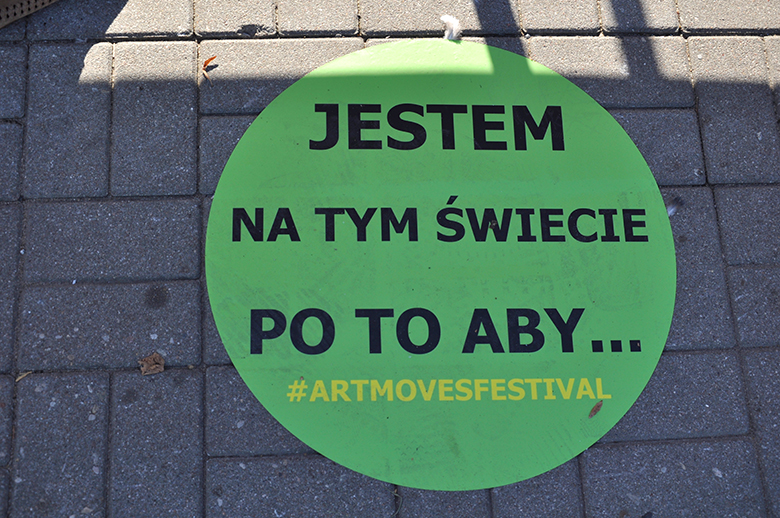 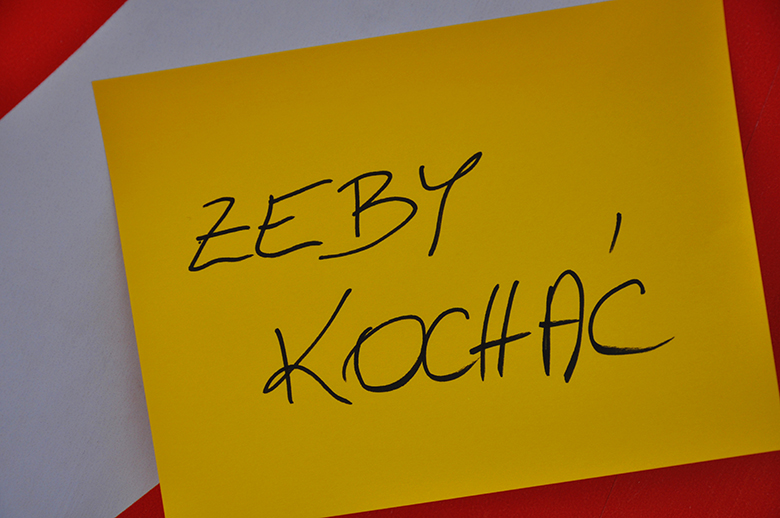 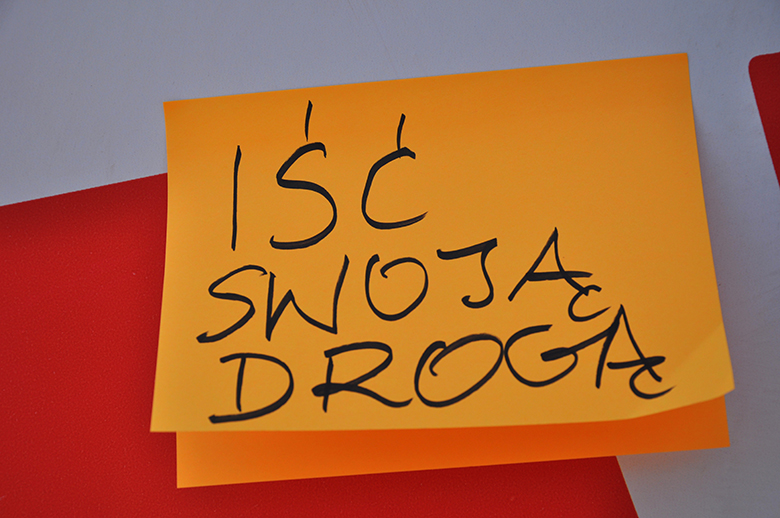 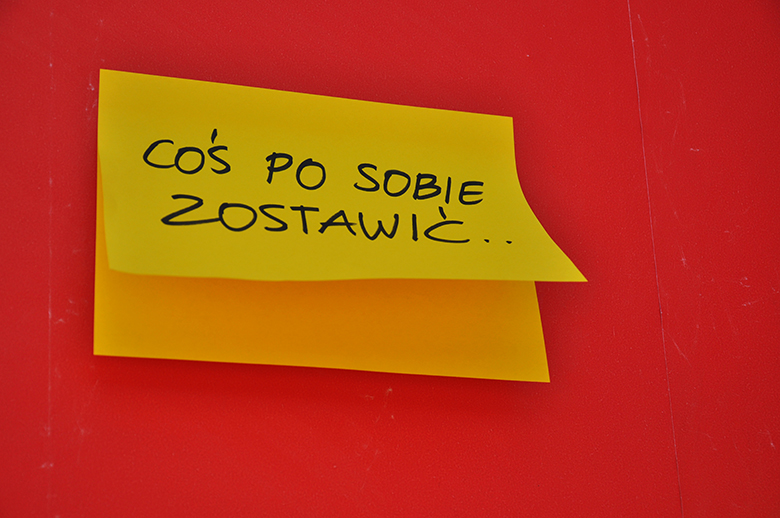 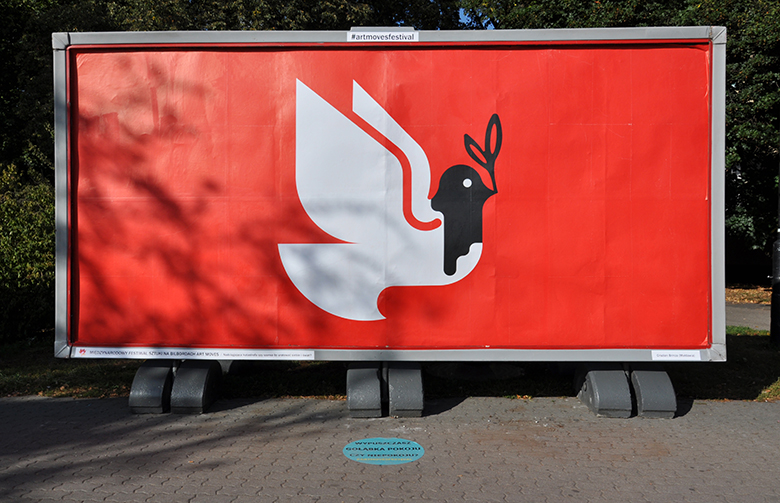 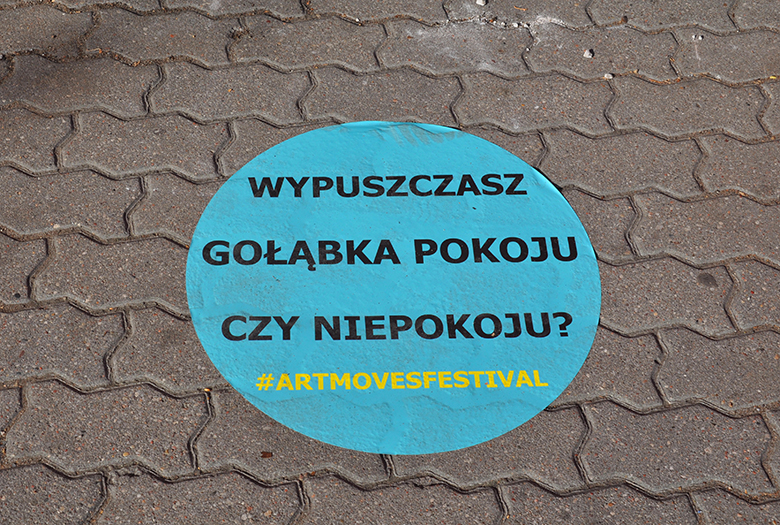 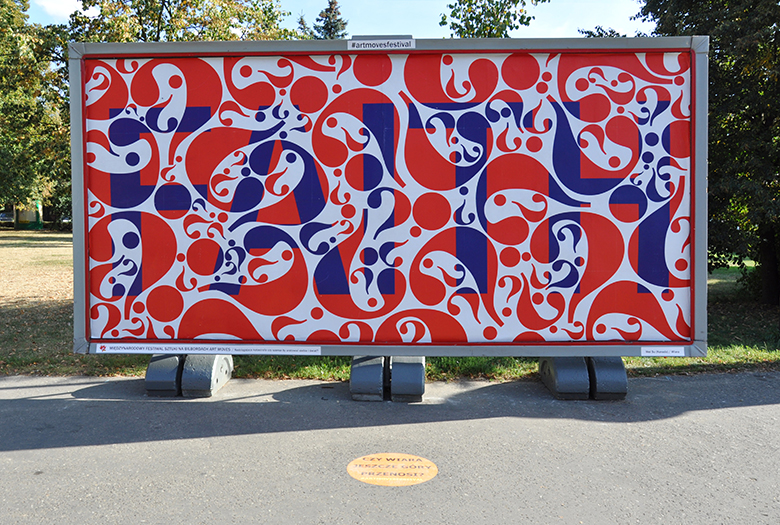 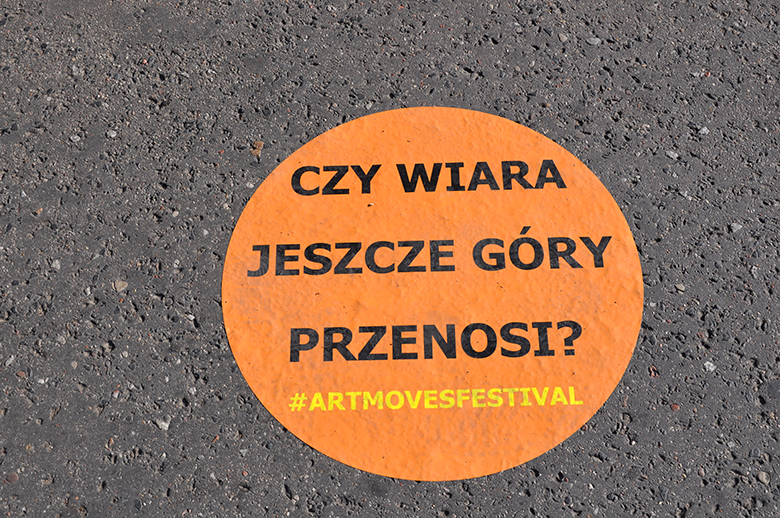