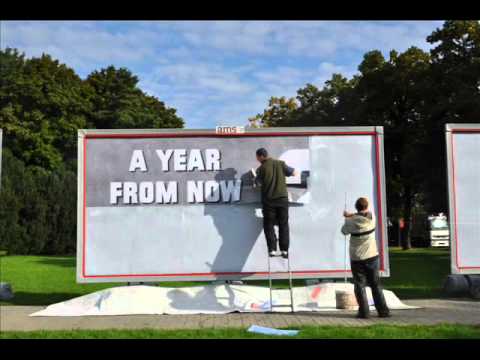 The festival was held under the honorary patronage of Piotr Całbecki, Governor of Kujawsko-Pomorskie Region and Michał Zaleski, President of Toruń.

The originators of the festival are of the opinion that art exhibited in the city space can be of significance to contemporary man by breaking the everyday routine, showing new paths and evoking emotions. We use a billboard – symbol of the modern age consumption – and change it into an object of consideration, reflection and a deep insight into ourselves and the surrounding reality.

During this edition of the festival, works of twenty one artists from eleven countries of the world were displayed in the city space of Toruń on billboards and megabilloards. The main location of the festival was Rapackiego Square, where the main exhibition took place on specially installed billboards. The main exhibition also encompassed two mega-pieces by Mark Titchner and the large piece by Galeria Rusz (displayed on the former Gastronomik building). The organising committee honoured one of the artists with Art Moves Special Award for the first time. The award is to be conferred upon artists consequent in their attitudes and artistic activity, who remain open to the surrounding reality, a rare quality in today’s world. Such a quality is manifested through the creation of outstanding works of art that are not only moving but also encourage new interpretations, allowing us to take a fresh look at our own selves and at the world we live in. The award is a tribute paid by artists – the organisers of the festival – to the awarded artist. It is to express the fascination and joy that comes from experiencing the work of this artist. It also serves as a guide for the viewers, encouraging them to take a closer look at the works of a given creator. In 2010 the award was given to an outstanding young British artist – Mark Titchner. In 2010, for the second time, the festival was accompanied by a Competition of Art on Billboards, the main idea of which is to encourage young artists to create art engaged in the present reality. The competition is addressed to artists and art students. The participants were invited to create work of art in response to the competition theme “Together or apart?” Altogether, 1108 entries were submitted by 584 artists from 61 countries of the world.

The jury composed of artists and art curators, including:

selected ten best works which were exhibited in the competition component of the Festival. The author of the most interesting work – Jakub Geltner from the Czech Republic received an award of PLN 7,000.

The festival has been co-funded by Toruń Municipality and the Local Authorities of Kujawsko-Pomorskie Region.