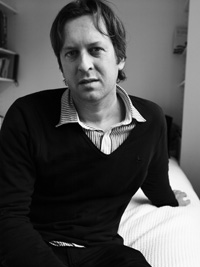 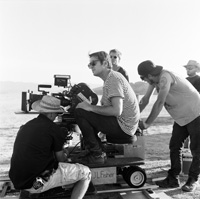 Widely known for his innovative fine art installations, Doug Aitken is at the frontier of 21st century communication. Utilizing a wide array of media and artistic approaches, Aitken’s eye leads us into a world where time, space, and memory are fluid concepts. Aitken’s body of work ranges from photography, sculpture, and architectural interventions, to films, sound, single and multi-channel video works, and installations. His non-stop and extensive explorations inform his work with a modern nomadic existence, where travel and movement are folded into our daily experience. Aitken has had numerous screenings, solo and group exhibitions around the world including the 1999 Venice Biennale, where he won the International Prize for his acclaimed installation “Electric Earth”. He has exhibited work in institutions such as the Whitney Museum of American Art, the Museum of Modern Art and the Pompidou Center in Paris. Using complex imagery and associations Aitken consistently approaches philosophical questions addressing nature and civilization as well as people and their relationship to time and space. Working with the idea of the present and presence, Aitken refers to his films and installations as being pure communication.

Ken Lum works in a number of media including painting, sculpture and photography, his art is conceptually oriented, and generally concerned with issues of identity in relation to the categories of language and portraiture. Lum won a Guggenheim Fellowship in 1999. He was awarded the Killam Award for Outstanding Research in 1998 and a Hnatyshyn Foundation Visual Arts Award in 2007. He represented Canada at the Sydney Biennale in 1995, the São Paulo Art Biennale in 1997, the Shanghai Biennale in 2000 and at Documenta XI in 2002. Lum has worked on several public art projects as well. In Vienna in 2000 Lum realized a 540 square metre work “There is no place like home”, in 2010 completed Monument for East Vancouver, a permanent outdoor artwork located in the traditionally working class side of Vancouver.

Why do you create art?
I create art because I believed it is the only area of true escape from the systematized and defined world, although in recent years, I have developed great doubts about I still believe this. 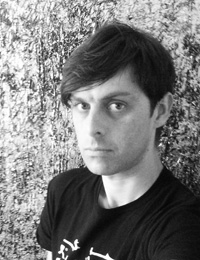 Mark Titchner works across a range of media including public works, sculpture, installation and video. Titchner’s modes of production vary dramatically between highly finished digitally designed pieces to meticulous hand carved sculptures. Titchner combines these disparate elements to form elaborate installations that reverberate with many voices. An extraordinary variety of messages adorn his works, scavenged from song lyrics, philosophical tracts, scientific treatises and occult religions. Describing his work as ‘a dialogue about how you receive thoughts and ideas’, Titchner’s work investigates how ideologies are formed and the problems associated with their communication and distribution to us. He has exhibited his work extensively internationally in museums, galleries and public sites. He was nominated for the Turner Prize in 2006 and took part in the Venice Biennale in 2007.

Why do you create art?
To try and understand the world just a little bit better. To reflect on why we are what we are rather than something else, maybe something better. What else is there? 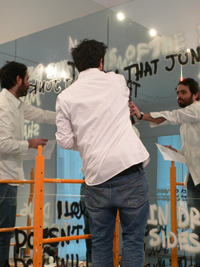 His work combines a conceptual practice with a rough and critical attitude that questions its inner activity at the same time as it reflects on our sociological context. Even if the artist mainly works with text, using vinyl and neon as its supports, he explores a wide range of media, creating big installation pieces, videos, paintings and drawings. Brüggemann’s works find their essence in an odd combination between philosophical concepts (mainly grounded on post-structuralism and deconstructionism) and popular imagery, often inspired by punk ideologies and attitudes (anti-conformism, provocativeness and an cynicism). His main strategy is to insert a certain pop sensibility into conceptual practices. He has recently exhibited at the Kunshalle Bern, Museum of Contemporary Art Chicago, Bass Museum Miami, Museum of Contemporary Art Cincinnati.

Why do you create art?
It’s beyond my control.

What do contemporary people need art for?
To think. 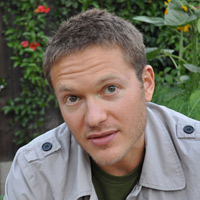 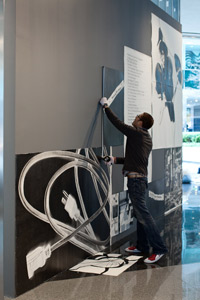 Why do you create art?
I was good at some things as a kid, not so good at others. But there were only two things at which I really excelled, playing soccer and making art. Soon I started to play soccer at a higher level, but then there came a time when I just could no longer compete; I was just outmatched. That never happened with art, so I keep going with it. It really was a process of elimination, and maybe if I was bigger, faster, or more skilled, I’d be a soccer player.

What do contemporary people need art for?
People do not need art. It has no use value, no purpose. If it suddenly seeks to exist, nobody will die or experience physical harm. It exists completely outside of human need, it is at the level of culture, that which makes life valuable or worth living. We need food and shelter so that we might laugh, love, pray or experience art. 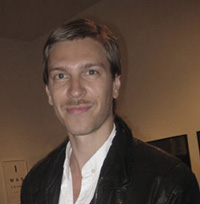 One of the main questions posed in Kasper Sonne’s work is whether culture dictates the construction of meaning or whether it can be negotiated. Sonne engages in an open discussion of the established and the alternative, and his practice revolves around established notions of terms and symbols, which in his work take on a new, open or altered meaning. The notions of truth and trust play a central role in Sonne’s work, but he keeps deconstructing any apparent order or clear syntax they may suggest, as well as our understanding of them. With a view to the construction of meaning in our culture and society, Sonne explores how it is negotiated and how ways are found to work with different degrees of belonging and non-belonging. Rather than building a series of images, Sonne addresses his subject matters through video, photography, painting, sculptures and installation work. Sonne has exhibited internationally at galleries and museums and his recent solo presentations include V1 Gallery in Copenhagen, Charles Bank Gallery in New York and SAPS Museum in Mexico City.

Why do you create art?
To navigate in the world.

What do contemporary people need art for?
To navigate in the world. 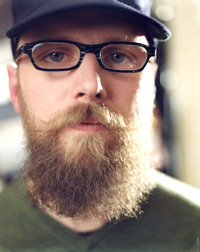 He received a BFA from San Francisco Art Institute in 2001 and a MFA from the University of California, Los Angeles in 2006. He works with issues of advertising and the use of public space. He is a founder of the Anti-Advertising Agency, an artist-run initiative which critiques advertising through artistic interventions. Lambert’s artistic practice includes drawing, performance, intervention, culture jamming, public art, video, and internet art. He collaborated with numerous artists including the Graffiti Research Lab, and the Yes Men. Lambert’s projects have won awards from Prix Ars Electronica, Rhizome/The New Museum, the Creative Work Fund, Adbusters, the California Arts Council, and others. His work has been shown at various galleries, and museums both nationally and internationally. He is a Senior Fellow at the Eyebeam Center for Art and Technology, and teaches at Parsons/The New School and Hunter College.

Why do you create art?
For me, art is a bridge that connects uncommon, idealistic, or even radical ideas with everyday life. I carefully craft various conditions where I can discuss these ideas with people and have a mutually meaningful exchange. Often this means working collaboratively with the audience, bringing them into the process or even having them physically complete the work. I want my art to be relevant to those outside the gallery – say, at the nearest bus stop – to reach them in ways that are engaging and fun. I intend what I do to be funny, but at the core of each piece there is also a solemn critique. It’s important to be able to laugh while actively questioning the various power structures at work in our daily lives. I have the unabashedly optimistic belief that art changes the way people look at the world. That belief fuels a pragmatic approach to bring about those changes. 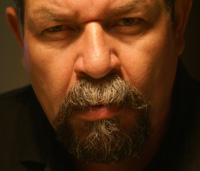 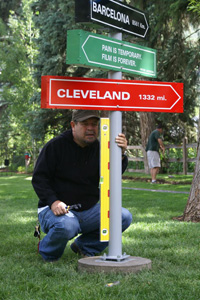 He is a multidisciplinary artist, creates installation, sculpture, painting, video, drawing etc. Any medium that delivers the project and the idea functions to him. He creates large-scale public installations informed by a political and social consciousness and is a longtime explicator and arbiter of the cross-border dialogue. In his work, ERRE brings a poetic sensibility to the physical, economic, linguistic and cultural boundaries that separate people. Describing his works simply as “constructions that accommodate ideas”, he frequently employs recognizable formats – traffic signs, eye charts, tourist bureau guideposts – to present unembellished and often unsettling information. He obtained Law Degree in the Universidad Autonoma de Baja California. Immigrated to the United States where he worked for 17 years in the construction industry as a carpenter. In 1989 became active in the field of visual arts, since then he has participated in residencies, lectures and different individual and collective exhibitions in countries like Mexico, USA, Russia, China, Puerto Rico, Germany, France, Portugal, Spain, Cuba, Chile, Argentina, Brazil and in mayor exhibitions like the VI and VII Havana Biennials, the Whitney Biennial 2000, The 2007 Sao Paulo /Valencia Biennial, The California Biennial 08 and the second Moscow Biennial among others. In 2007 received a United States Artist fellowship and since 2009 is a member of Mexico’s National System of Art Creators.

Why do you create art?
Because I care and that is the best way for me to express myself.

What do contemporary people need art for?
Contemporary society today needs Art for the same reason that has need it since the first human being appeared in this world, because Art is a need and a tool for communication, the supreme expression of the soul , and the best way to understand ourselves, our needs, our deeds our motivations. This world without Art would be a very lame desert. 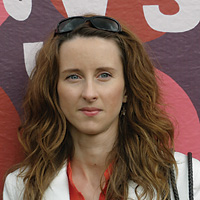 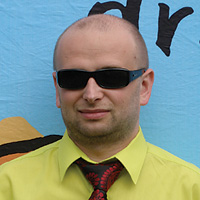 Galeria Rusz is an art group based in Toruń, established by the two artists: Joanna Górska and Rafal Góral­ski. Their main interest is the creation and presentation of art in public space. Since 1999 they’ve run their own billboard gallery at Szosa Chełmińska 37 in Toruń, called ‘Galeria Rusz’, which is the world’s longest ever existing project displaying art on the same billboard and in the same location. Górska and Góralski create billboard posters, paintings, murals, undertake artistic interventions and public art actions. The artists have so far created over 200 artistic billboards. Their work is concerned both with the private, individual sphere of life (which might be, in a simplified manner, called a psychological sphere) and with the external, collective sphere (which might be, in a simplified manner, called a social sphere). This division is rather symbolic and blurry – it is to underline the fact that through their work they try to describe the complex situation of the human being, who is both an individual and a member of a larger community, with all the dependencies stemming from this fact. Their works provide a new frame for certain fragments of reality, a frame allowing for new interpretations. They encourage the viewer to frame their perception of certain phenomena in a new way, to play with the frames providing context for the interpretation of a given phenomenon.

Artists from the Rusz Gallery have received numerous awards, they have also been granted artistic scholarships, such as the prestigious “Młoda Polska” Ministry of Culture and National Heritage Scholarship in 2009. In 2007 they were nominated for the “Spojrzenia 2007” Deutsche Bank Foundation Award. They have participated in various exhibitions in Poland and abroad, including “Take a look at me now” exhibitions at the Sainsbury Centre for Visual Arts in Norwich as a part of Polska!Year in Great Britain in 2009.

Why do you create art?
Because we want to MOVE ourselves and other people.